It was a beautiful morning with the sun reigning supreme from a crystal blue sky after 6 days of straight precipitation in Central Florida as the 3-4 year old champions converged on the immaculate and hallowed grounds of lovely Lake Nona Golf and Country Club for the dual sponsered Annika Sorenstam Foundation East Central Chapter PGA  Little Linksters Tour Event #6!

Zev was in great form going into the opening 110 yrd par 4 hole, with the strongest drive straight in to the open fairway.

Zev chose a 7 iron for his second shot 40 yrd approach to the green- it was a great club selection and he hit it beautifully- although he got a bit of a bad bounce to the right from the rock hard green.

After a just missed birdie putt, Zev finished the hole with a smooth 5 foot putt for par, to tie with the field going into the second hole par 5.

At the 155 yrd par 5 second, Zev crushed a huge drive down the middle of the fairway, following up with a second shot 3 metal to around 50 yards short of the expansive green, which was protected on the back three sides by water. Next a 7 iron took him to within 15 yrds of the start of the green. At this point Zev made a crucial decision to use his putter on the apron and hit a deep shot to the backward pin position. He came up roughly 20 feet short. However, his opponent took a risk with a pitching wedge and came up well beyond the flag. Zev’s par putt went slightly left of the flag, and his opponent’s putt went speeding past the hole, missing by a half a millimeter but ending up well 20 feet past the hole. A slight miss short gave Zev a chance to win the hole with a knee knocking 6 footer- which he proceeded to drain with little hesitation!

This brought us to the final par 3 hole, a daunting 50 yrd tee shot to an undulating green protected by water on the right and cavernously deep bunkers on the left. Zev hit a strong 3 metal that we teed almost to ground level- and ended up on the green- just missing a vertigo inducing 20 ft drop off straight into alligator invested water below the green. His opponent hit an errant tee shot straight into the bunker. After a missed escape attempt, he recovered with an extremely nice chip shot straight into the hole for par, giving Zev a 2 shot chance for the win from the edge of the green. Zev hit his first putt short. Finally, with a do or die 6 ft putt on a slopping lie, Zev smooth putted right down the middle for the win!

Of course the score card signing was a highlight: 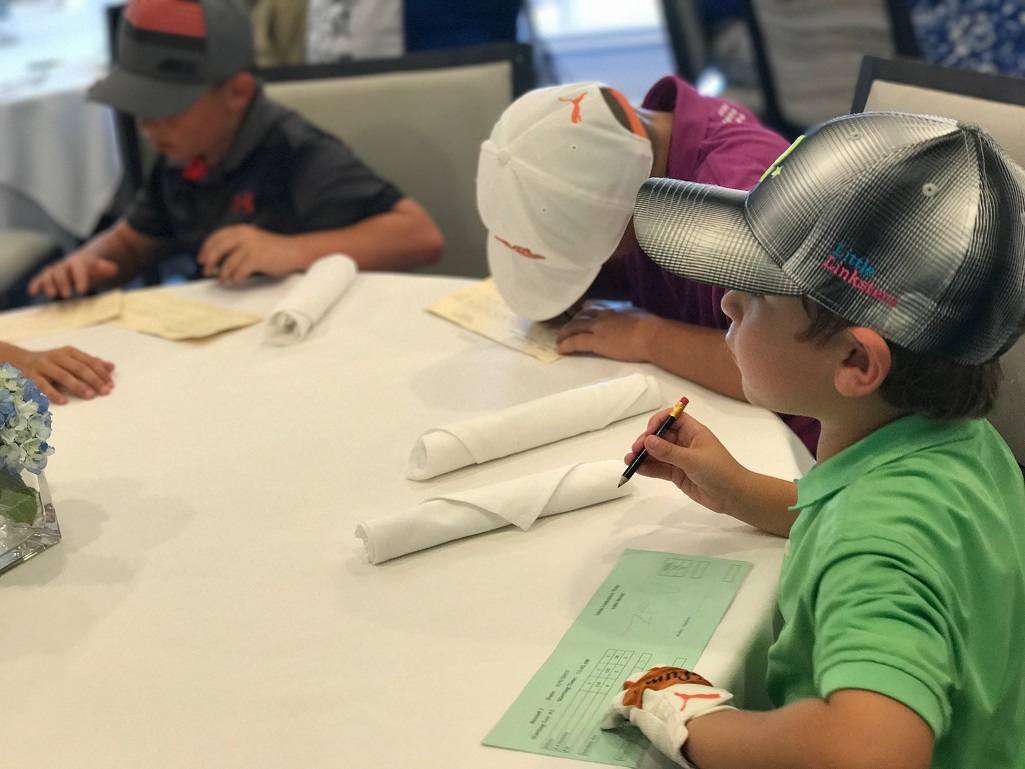