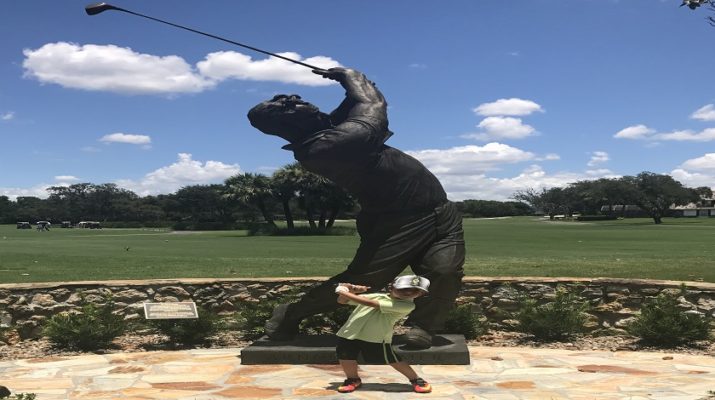 A sweltering 94 degree sun awaited our champions at golf’s holy shrine, Arnold Palmer’s Bay Hill Club and Lodge, for the 8th LLT tour event. A new competitor joined the field of 3-4 year olds and the competition was underway at 2:50 PM on the 100 yrd par 4 first tee. Zev crushed a nice drive into the fairway. Next he faced a ball that was on a sideways hill lie adjacent to the bunker, with the green ahead about 30 yrd. We chose a 7 iron, which turned out to be way too much iron, as Zev hit a surprisingly strong shot that flew over the green and into the bunker behind. His third shot, a nice SW, sent the ball almost into the hole for birdie-instead skipping over it and  rolling to just off the green. Zev took his putter from the apron for a long  par putt that came up short, and took an easy 4 footer for bogey.

The next hole was a short 40 yrd par3 with an expansive bunker on the right and a large lake on the left. Zev teed up his ball very low and took a 7 iron- a beautiful high shot that landed just inside the left bunker pin high.  A camerman recording each competitor’s shot on this hole for the tour told Zev ‘nice shot!’ and said he was glad to get it on film. Next Zev took a SW and escaped the bunker with a very nice chip, leaving a short 3 foot putt for par.

Going into the third hole 160 yrd par 5, Zev now found himself tied for the lead.  The green was protected by a fairway bunker and a green bunker on the left, and water on the right, which menacingly crept into the end of the fairway just in front of the green.  Zev hit a nice drive into the fairway, but on the second stroke disaster struck as Zev flubbed a 7 iron shot  that went only about 10 yrds. His next shot went straight into the fairway bunker. He missed his bunker escape, then hit his 5 shot into the green left side bunker. He missed 6, and mercifully holed his 7th shot with a very nice SW straight into the hole for double bogey and third place.

All in all it was a nice showing- we’ve been working a lot on the SW shots and the hard work paid off with some good short game saves today. Next time perhaps we’ll bring some beach towels and shovels for all that sand play!